Time to Draw a Line in the Tar Sands

The impact of climate change on global food security is sure to be one of the most critical issues we’ll be facing in the years ahead. Since agricultural productivity depends on a stable and congenial climate, we cannot tamper with the climate without jeopardizing the world’s food supply. Over the past decade we’ve seen how a warming climate has triggered long droughts, violent hurricanes, torrential storms, and searing heat waves, reducing yields of essential food commodities. Policy expert Lester Brown writes ominously: “Extreme soil erosion, growing water shortages, and the earth’s rising temperature are making it more difficult to expand production. Unless we can reverse such trends, food prices will continue to rise and hunger will continue to spread, eventually bringing down our social system.”[1]

As an organization dedicated to the battle against hunger and malnutrition, Buddhist Global Relief is deeply concerned with how we’re altering the climate. In our view alleviating hunger calls not merely for acts of philanthropy but also for a vigorous effort to counteract the forces responsible for hunger, among which global warming is now the most formidable. Tackling climate change requires in the first place a commitment to honesty and truth. We can’t hide behind the mask of denial and we can’t afford the luxury of delay. We have to recognize that the primary cause of global warming is human behavior: our carbon-driven economy, our frenzied consumerist culture, and the hunger of fossil fuel corporations for ever greater profits.

Actions have consequences, and so too does the failure to act. Practices born of narrow self-interest will inevitably rebound, harming ourselves as well as others. Since an altered climate affects us and our communities, tackling it is partly a matter of enlightened self-interest. But only partly, for it is also a matter of justice. The freakish weather patterns whipped up by an altered climate bear down hardest on poor populations in the global South, those least responsible for greenhouse gas emissions and least equipped to deal with the  devastation. This fact gives climate change an inescapably ethical dimension. It makes our impact on the climate a moral issue—the burning moral challenge of our time, perhaps even the gravest moral challenge in human history. From this perspective considerations based on expediency and pragmatic efficiency fade into the background. The primary demand placed on us is to act as the situation demands–under the guidance of compassion, humane responsibility, and a commitment to social justice. 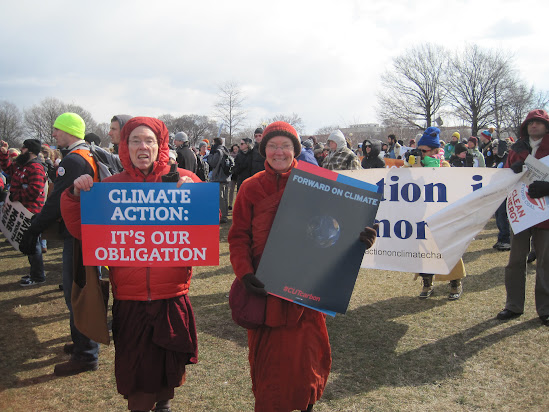 It was thus to answer the call of conscience that two weeks ago I traveled to Washington to participate in the demonstration against the Keystone XL pipeline. KXL, as it’s often called, has emerged as the symbolic rallying point in the battle to stop climate change. Over the past two years a vigorous campaign against it has been waged across the country and the D.C. demonstration was to mark its culmination. Just a month earlier I joined fellow clergy in Washington for a “pray in” against the pipeline. On February 17th, I returned to the capital to attend a demonstration promoted as “the largest climate rally in history.”

The weather in Washington that day was bitterly cold, but joining the rally nurtured my body and soul with the warm joy of knowing I was part of a movement dedicated to a crucial mission. Ayya Santussika, another BGR board member, had flown all the way from San Francisco to join the rally, and a contingent from the Interfaith Moral Action on Climate gave the gathering a broad effusion of spirit. Sixty environmental organizations endorsed the rally, including the Sierra Club, 350.org, and the National Resources Defense Council.

From the place where I stood on the National Mall I could not judge the size of the crowd, which extended as far as my eyes could see, but reports the next day estimated the number to be between 35,000 and 50,000. Speakers included Bill McKibben, who has led the anti-KXL campaign from the start, green-tech advocate Van Jones, and Senator Sheldon Whitehouse. The most moving speakers, however, were three Native American women who rocked the audience with their vision of a different kind of relationship between human beings and the natural world—a relationship of love and kinship rather than extraction and commodification.[2]

For those who haven’t been following environmental news, the Keystone XL pipeline is proposed as a means of transporting tar-sands oil from Alberta, Canada, to refineries along the Gulf of Mexico. If completed, it will allow delivery of 830,000 barrels of crude oil daily from Alberta to the Gulf. Tar sands is a mixture of sand, clay, water, and bitumin, a form of petroleum said to be 17% more carbon intensive than ordinary oil. In terms of proven crude oil reserves Alberta ranks third in the world, just behind Saudi Arabia and Venezuela, but ahead of Iran, Iraq, and Kuwait. In 2011, Alberta’s total proven oil reserves were 170.2 billion barrels, of which 168.7 billion (99%) come from the tar sands.[3]

Exploiting this much oil promises big returns to the petroleum corporations, but to proceed with this project is truly to enter into a bargain with the devil. Why so? Extracting and processing tar-sands oil is an energy-intensive operation that produces three times more greenhouse gas emissions than conventional oil. It also leaves behind gigantic lakes of toxic waste. Already tar-sands oil extraction has turned huge tracts of Canadian forest into a barren moonscape visible even from outer space.[4]

Bill McKibben describes KXL as “the fuse to the biggest carbon bomb on the planet.” NASA climate scientist James Hansen has said that “if the tar sands are thrown into the mix [of existing carbon fuels] it is essentially game over” for the climate. Apart from the sharp increase in atmospheric carbon such a pipeline would enable, the project poses other environmental dangers. There’s the real risk the pipeline might leak, spilling millions of barrels of oil into precious waterways and aquifers, polluting fertile farm land, discharging toxins into the air, and destroying the habitats of wild birds and animals.[5]

The Canadian corporation scheduled to construct the pipeline, TransCanada, has powerful representatives in D.C. Its chief lobbyist for this project had been the deputy campaign manager for Hillary Clinton during her run for the presidency, which virtually gave TransCanada a backdoor key to the State Department. Letting vested interests dominate climate policy is terribly shortsighted. Global warming has already unleashed a chain of disasters around the world, from long droughts and heat waves to monster storms and hurricanes. The last thing we should be doing now is seeking new sources of fossil fuels to feed our appetite for energy. Not only does the burning of such fuels directly pump more carbon into the atmosphere, but a hotter climate would likely set off unpredictable feedback loops escalating global warming to greater heights.

Instead of seeking new sources of  fossil fuels, we should be converting at breakneck speed to clean and renewable sources of energy, such as wind, solar, and geothermal power. Such a transition won’t be easy, for the oil, coal, and gas corporations will fight back, using their grip on Congress to resist any changes that cut into their profits. To turn the tide would require a no-holds-barred grassroots campaign, one that should be guided by intelligent planning and inspired by a conscientious concern for all the world’s people, present and future.

Because the pipeline will cross the border between Canada and the U.S., a presidential permit is needed for construction to go ahead. Before the permit is granted, the President directs the Secretary of State to determine whether the project is in the “national interest.” The Department of State then commissions an environmental impact study on the basis of which the President makes his decision. While final authority to approve or reject the pipeline rests with the President, after the impact assessment is issued, the Department solicits comments from public citizens, government agencies, tribal governments, and interested non-governmental organizations. This should give us hope that our collective voices can make a difference.

A little over a year ago President Obama was on the verge of approving the Keystone pipeline, but passionate protests by environmentalists, climate scientists, clergy, and ordinary citizens—staged just as the election season began—convinced him it would be more prudent to delay a decision until after the election. Since then the decision has been postponed several times, pending a new State Department assessment of the pipeline’s likely environmental impact.

This past Friday, March 1st, at 4 pm, just as the work week was winding down, the draft of the new assessment was released.[6] The report has sparked outrage throughout the climate movement. Michael Brune, executive director of the Sierra Club, issued a press release stating that if President Obama is really committed to fighting the climate crisis, “he should throw the State Department’s report away and reject the dirty and dangerous Keystone XL pipeline.” Bill McKibben announced his intention in the weeks ahead to mount as many public protests as possible. Jane Kleeb of the group Bold Nebraska wrote that “with a stroke of a pen he [Obama] can protect property rights, water, and make a dent in climate change.” Bill Snape of the Center for Biological Diversity said Obama “needs to take Keystone XL off the table. There’s simply no way to be in favor of this dirty, dangerous project and still think we’re going to avert climate catastrophe.”[7]

These critics are likely to be right. In any case, with global warming on the rise through a multitude of causes, we’ve got to call a halt somewhere to the quest for ever-new sources of fossil fuels, and KXL has just happened to emerge as the major battleground in the contest. This is the symbolic line in the sand that we can’t cross; this is the test that will determine how earnest we are about protecting our own future and preserving a viable planet for posterity. Tar-sands oil is one of the dirtiest fuels imaginable. To add its emissions to our atmosphere, already overburdened with carbon, is to play with fire and fury. A post on the RealClimate website succinctly explains the significance of KXL: “If the Keystone XL pipeline is built, it surely smooths the way for further expansions of the market for oil sands crude. Turning down XL, in contrast, draws a line in the oil sands, and affirms the principle that this carbon shall not pass into the atmosphere.” 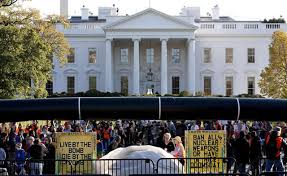 If KXL becomes operational, the greenhouse gases released into our skies may push the climate beyond the point of reversibility, leaving us a barren, desecrated, desolate world. Rejecting the pipeline could propel us onto an alternative course, a new pathway leading away from fossil fuels to a rapid expansion of clean renewable energy. We now stand at a critical crossroads, and the President’s decision may well depend on whether we let him know our minds. In this momentous contest, we can’t sit by as passive observers but must step forward as warriors for the climate, as defendants of the culture of life against the profit-driven culture of death.

The Sierra Club has given us the opportunity to communicate directly with the White House. On their website you will find an appeal that you can send to President Obama, urging him to reject the Keystone XL pipeline. Only weeks remain until he makes his decision, so don’t postpone writing to a rainy day. Take action now right here.

[3] These figures are taken from Alberta Energy, http://www.energy.alberta.ca/oilsands/791.asp.

[4] These facts are taken from Desmogblog’s “Top 10 Facts About the Alberta Oil Sands,” updated February 2013, at http://www.desmogblog.com/top-10-facts-canada-alberta-oil-sands-information.

[5]  For more on the dangers posed by the pipeline, see Key Facts on Keystone XL | Rainforest Action Network http://ran.org/key-facts-keystone-xl#ixzz2Mg7226kT. The Desmogblog fact sheet on the tar sands reports that in April, 2008, a flock of migrating ducks landed on a tar sands toxic lake and died.

[6] For the Executive Summary of the Environmental Impact Statement, see http://keystonepipeline-xl.state.gov/documents/organization/205719.pdf.