The Buddhist website Buddhistdoor Global recently conducted an interview with me via email. Based on the interview, the editor Raymond Lam wrote an article highlighting my work both on climate change and the mission of Buddhist Global Relief. Here is the article.–BB 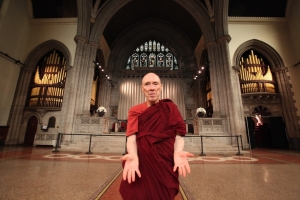 At the Fourth Universalist Society in the City of New York. onlytheblogknowsbrooklyn.com

American scholar and Theravada monk Venerable Bhikkhu Bodhi might not receive the same high-profile press coverage as the Roman Catholic Church’s charismatic standard-bearer Pope Francis, but it is becoming evident to Buddhism watchers and commentators that his message is every bit as bold, eloquent, and sophisticated as the Pope’s. The recent focus on Bhikkhu Bodhi and other courageous Buddhist leaders who are highlighting imminent threats such as climate change or global hunger might well be influenced by a popular resonance with the urgency with which Pope Francis speaks about ecological catastrophe and poverty. Whatever the reasons, Bhikkhu Bodhi’s actions speak loudly for themselves. As the founder and chair of humanitarian organization Buddhist Global Relief (BGR), his activist work centers specifically on the issues of climate change (he is a spiritual ambassador for the interfaith climate change movement Our Voices) and hunger relief.

“When we started BGR, we initially set our mission to help those afflicted with poverty, disaster, and societal neglect. But after a short time we realized that this was too vague and not practical. Even large, well-established humanitarian organizations like CARE and Oxfam have more precisely defined missions. As a tiny Buddhist organization, we could not tackle the whole range of human challenges on this planet without dissipating our energies,” he says.

“I thus drew on my own experience in Sri Lanka and India, where I knew many people were suffering from malnutrition—though this problem is not as acute in Sri Lanka as it is in other countries. I also had read about the extent of global hunger, and it boggled my mind to realize that close to a billion people were suffering from food insecurity and that some six million a year died from hunger and hunger-related illnesses. I learned that it would take only about US$40 billion a year to eliminate global hunger. Yet worldwide, governments pour perhaps a few trillion dollars annually into military budgets, while millions die of hunger. This struck me as a tragedy and pulled at my heart. The Buddha, in the Dhammapada, had said: ‘There is no illness like hunger,’ and he often stressed the merits of providing food to the hungry. Thereby I saw a close fit between traditional Buddhist values and a more precise mission for BGR.”

Bhikkhu Bodhi’s visibility in American public discourse over the past several years, especially as a representative of a “minority” religion in the US, is already impressive. In May this year, he was at George Washington University and the White House to discuss Buddhist civic engagement and the types of policies that Buddhists would like to see implemented. From a long-term perspective, however, Bhikkhu Bodhi doesn’t believe that the small number of Buddhists in the US as a discrete movement can have a significant impact on civic life.

“We are just a few ripples on the surface of the lake. Rather, in my view, our best prospects for giving Buddhist values a role in public affairs would be to join hands with other faith-based organizations that share these values. Rooted in our respective faiths we can present a collective front, advocating for greater social justice, ecological responsibility, a more peaceful foreign policy, and an end to racism and police violence against people of color,” he suggests. “This is especially necessary in the US since fundamentalist Christians have grabbed the moral high ground, advocating an agenda that seems driven more by bigotry and religious dogmatism than by true benevolence and care for the less fortunate.”

Many Buddhist leaders as well as voices from other faiths recognize that divided, the religions cannot form a united front on mitigating and transforming many of the selfish and destructive interests that are threatening to exhaust the planet’s resources. “I do not think that we Buddhists on our own can contribute to the fulfillment of a global ethic,” Bhikkhu Bodhi says. “Our best prospects are to join with those of other faiths, and with people of goodwill who have no particular faith commitment but share our humanistic values.”

He continues: “The major threat I see today lies in the ascent of a purely utilitarian worldview driven by a ruthless economic system that rates everything in terms of its monetary value and sees everything as nothing more than a source of financial profit. Thus, under this mode of thinking, the environment turns into a pool of ‘natural resources’ to be extracted and turned into profit-generating goods, and people are exploited for their labor and then disposed of when they are no longer of use,” he warns, echoing many similarly dire warnings from other religious public figures.

“To resist these trends, I believe, we as Buddhists can be most effective by networking with others who regard human dignity and the integrity of the natural world as more precious than monetary wealth. By joining together, a collective voice might emerge that could well set in motion the forces needed to articulate and embody a new paradigm rooted in the intrinsic dignity of the person and the interdependence of all life on Earth. Such collaboration could serve to promote the alternative values that offer sane alternatives to our free-market imperatives of corporatism, exploitation, extraction, consumerism, and toxic economic growth.”

This will be no mean feat, and might be the greatest moral challenge posed to Buddhism and humanity as a whole in our time. To muster the energy to even begin building this united interfaith front, Bhikkhu Bodhi believes that Buddhists in the East and West alike need to nurture stronger humanitarian concern in their hearts. “Western Buddhists—and I think this is probably largely true among educated Buddhists in Asia—take to the Dharma primarily as a path of inward development that bids us look away from the conditions of our societies. If this trend continues, Buddhism will serve as a comfortable home for the intellectual and cultural elite, but risks turning the quest for enlightenment into a private journey that offers only a resigned quietism in the face of the immense suffering which daily afflicts countless human lives.”

He believes there are two primary moral principles involved in this effort. “One is love, which arises from empathy, the ability to feel the happiness and suffering of others as one’s own. When love is directed toward those afflicted with suffering, it manifests as compassion, the sharing of their suffering, coupled with a determination to remove their suffering,” he says. “The other principle that goes along with love is justice. Some of my Buddhist friends have objected to this, saying that justice is a concept foreign to Buddhism. I don’t agree. I think the word Dhamma, in one of its many nuances, can be understood to signify justice, as when the ‘wheel-turning monarch’ is described as dhammiko dhammaraja, which I would render ‘a righteous king of righteousness,’ or ‘a just king of justice.’ In my understanding, justice arises when we recognize that all people possess intrinsic value, that all are endowed with inherent dignity, and therefore should be helped to realize this dignity.”

Bhikkhu Bodhi finally joins the two concepts to form a distinct ethical ideal. “When compassion and justice are unified, we arrive at what I call conscientious compassion. This is compassion, not merely as a beautiful inward feeling of empathy with those suffering, but a compassion that gives birth to a fierce determination to uplift others, to tackle the causes of their suffering, and to establish the social, economic, and political conditions that will enable everyone to flourish and live in harmony.”

He invokes the idea of dependent origination to explain the need to see the interdependence between states of mind (particularly those governed by greed and delusion) and an economic system built on the premise of unlimited growth on a finite planet. If humanity is to avoid a horrific fate, Bhikkhu Bodhi concludes that a double transformation is necessary. First, we must undergo an “inner conversion” away from the quest to satisfy proliferating desires and the constant stimulation of greed or craving. But change is also needed in our institutions and social systems. Bhikkhu Bodhi suggests that people turn away from an economic order based on incessant production and consumption and move toward a steady-state economy managed by people themselves for the benefit of their communities, rather than by corporate executives bent on market dominance and expanding profits.

“At its most radical level, the Dharma teaches that the highest happiness is to be realized through the complete renunciation of craving. But few are capable of such a degree of detachment. To make the message more palatable, we have to stress such values as contentment, simplicity, the appreciation of natural beauty, and fulfillment through meaningful relationships, and the effort to control and master the mind.”

One response to “Conscientious Compassion—Bhikkhu Bodhi on Climate Change, Social Justice, and Saving the World”