Bolstering a Food Budget for Hungry Kids in Haiti

Posted on December 9, 2015 by Bhikkhu Bodhi | Comments Off on Bolstering a Food Budget for Hungry Kids in Haiti

This past May BGR approved a six-month renewable grant to the Art Creation Foundation for Children, in Haiti, to bolster its food program, which a budget shortfall had forced to be cut in half. This is a brief report on the project.

Kids enjoy a meal together

The Art Creation Foundation for Children is an arts-based non-profit organization created for the personal growth, empowerment, and education of children in need in Jacmel, Haiti. The Foundation provides art instruction, tutoring, medical care, daily food and water, and educational expenses for students in the program. Its mission is to build a passionate community of future leaders, visionaries, and dynamic thinkers who are empowered to better their lives and their world through the arts and education. “Rather than hand out a temporary fix,” they say, “we focus on empowering our students with the tools to create their own reality and decide the course of their lives.”

For over six months the Foundation had been operating with a 50% reduction in their food budget. This forced them to cut their food program services in half and stretch out what was left. Where they previously were able to provide the children two meals daily—their only meals of the day—they now could provide only one meal, and that meal was of lower nutritional value. In May BGR approved a six-month renewable grant to enable the Art Creation Foundation to return the feeding program as close as possible to its full level.

The feeding program provides far more than just food. Owing to poverty, families in Haiti have been known either to give a child over to an orphanage, or, still worse, to give up a child as a restavek—a form of modern-day slavery in Haiti by which children are given to relatives or strangers to serve as domestic slaves, performing menial tasks for no pay. This fate affects one in every 15 children in the country.

Prior to receiving the grant from BGR, the Arts Foundation was forced to eliminate half of the meals served a week and were are risk of cutting it even further. Since receiving the grant they have been able to return almost to their original feeding level, providing after-school meals to all children twice each day. As a result, the children began quickly showing greater concentration during after-school study and homework sessions. 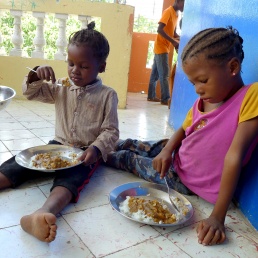 Their mood also improved. As one of the chefs stated, “When the food program was returned the child’s dignity was returned.” The children no longer come to her and complain that they are still hungry, and she no longer has to turn them away.

The children chosen for the program were often eating only 3 or 4 meals per week and many times even less. There was no consistency to their meals or reliable expectation of where their meals would come from. With the feeding supplement provided by BGR, all this has changed.

Here are testimonies from a few of the kids:

Jovin is 10 years old and in the third grade. Prior to joining the program he would sometimes get a meal a day, and often go without eating for days. He ate when food was available and he didn’t know when that would be. He says that since he began eating at ACFFC his whole life has changed. He doesn’t worry daily about when or where he will eat again and he says he now eats foods that are good for him. He says that eating every day, and knowing that he will eat everyday, means he can do better in school and he can pay attention. He doesn’t have to think all the time about being hungry.

Kenderson is 9 years old and also in the third grade. He says that before joining the program he never knew when he would eat and sometimes would go for days without a meal. Since joining the Foundation he knows that he will have “good and healthy” food every day and need not worry. He says that he will “forever be grateful” that we got help to feed all the kids again and he thanks you for helping us.

Yelva is 8 years old and in the second grade. Yelva said that before coming to the Foundation, the only way she would eat was by begging her neighbors to let her have some food. Sometimes people would give her something, sometimes they did not have enough to give. Often she would go for days eating nothing. Some days she would go work for the food vendors and in return they would give her “the gratin” or leftover scraps. Now, she says, she can eat at ACFFC every day. She does not have to beg anymore and she isn’t disrespected by people.

The grant provided by BGR enabled the Arts Foundation to keep the feeding program going over the last six months, providing the kids with consistent and healthy meals so they would work harder in school and yes, play harder in life. 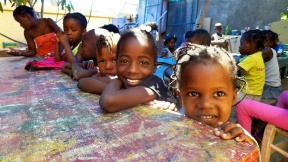 (The information in this post is based on the report from the Art Creation Foundation for Children.)