Posted on November 22, 2016 by Bhikkhu Bodhi | Comments Off on Enhanced Homestead Food Production in Côte d’Ivoire

In May 2013, Buddhist Global Relief (BGR) awarded Helen Keller International a three-year grant to support their Enhanced Homestead Food Production (EHFP) and Orange-Fleshed Sweet Potatoes (OFSP) production in Côte d’Ivoire. The project extended from September 2013 to August 2016. The goal of this project was to improve the nutritional status of children and families in the Gebke Region of Bouake District. In this region, as elsewhere across Côte d’Ivoire, people face a constant struggle with food security, availability of micronutrient-rich foods, and accessibility to markets.

Group members in the garden

With BGR’s support, HKI piloted a three-year adaptation and expansion of its proven Food Production program model. They integrated EHFP into an existing community group and promoted the production and consumption of vitamin A and micronutrient-rich crops, including orange sweet potatoes. In an effort to improve the local group’s capacity to adapt to ever-increasing water shortages that threaten production, the HKI team helped pilot a drip irrigation system on the group’s model farm, which was used to train group members on improved agriculture techniques.

HKI also collaborated with local organizations to implement various other project activities and to provide direct support to the women’s group benefiting from BGR’s support. The women’s group is called “Kolotiolo Hokan”, which means “God Gave Us Grace” in the Senoufo language. Group members learned to apply improved agricultural techniques that have brought them recognition by their village leaders, community, and family members who help them as they have now seen their activities and incomes increase considerably over the life of this project. 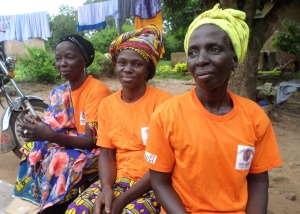 Members of the group and their neighbors have learned about the fundamentals and importance of improved nutrition and hygiene. The group has formalized their legal status, opened a bank account, and improved their ability to manage and market the surpluses they grow. This has empowered the women and led to increased autonomy. The health status of the group’s families and neighbors has also improved as they increasingly consume micro-nutrient rich food products they grow themselves. They have also learned about Essential Nutrition Actions (ENA) and Essential Hygiene Actions (EHA). The group members have also seen their social status improve as their income has increased as a result of this project.

Home visits focused on a monthly theme in order to reinforce behavior change messaging provided in months prior. In March 2016, home visits focused on exclusive breastfeeding for the first six months of life. In April 2016, the focus was on the nutrition and feeding of expectant and breastfeeding mothers, as well as complementary feeding of children from six months to two years of age. May’s focus was on feeding sick and malnourished children. In June, the focus was on vitamin A deficiency, in July on iodine deficiency and handwashing, and in August, the home visit focus was iron deficiency.

Group members as well as other community members expressed a great deal of satisfaction with the home visit component of the project. HKI undertook an informal focus group discussion with home-visit recipients, and everyone in the group stated that they enjoyed the visits, learned a lot from them, and would now change their behavior based on the new information they obtained.

For example, one woman said that she did not know that she should not give water to her newborn child in addition to breastmilk and has now stopped doing so. Another mother was not aware that she was not supposed to give her newborn infant porridge until he was six months old and has now stopped force-feeding her baby. Many mothers in the community who are not currently members of the women’s group have also expressed interest in obtaining orange-flesh sweet potato vines from the group members so that they can start growing them at home to provide their families increased vitamin A as well.

Staff at the local clinic that previously benefited from HKI’s ENA and EHA training has promised that they would continue promoting essential nutrition and hygiene actions in the community after the conclusion of the BGR project.

HKI linked members of “Kolotiolo Hokan” to the local “Producers Sales Office” (BVP) in Bouake. BVP is now assisting “Kolotiolo Hokan” members to make decisions about marketing their produce and choosing the best income crops to plant. Group members know the importance of maintaining a healthy, nutritionally-balanced diet and they also see great opportunity in being able to increase their incomes from growing produce. The support of BVP will help to improve the household income of the group members for years to come. 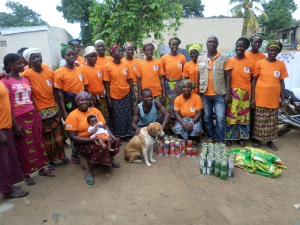 In July 2016, members of HKI staff held a series of meetings with the members of “Kolotiolo Hokan” to help them plan for the end of the project. The meetings were very productive. The “Kolotiolo Hokan” members expressed their gratitude to BGR for the tremendous help that has been provided over the past three years.

This article is based upon Helen Keller International’s Final Progress Report to Buddhist Global Relief.