Changing Directions Before It’s Too Late

Posted on April 21, 2017 by Bhikkhu Bodhi | Comments Off on Changing Directions Before It’s Too Late 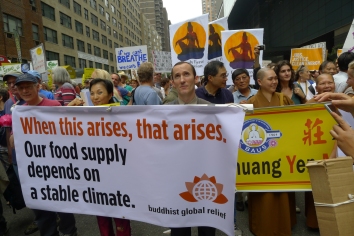 Buddhists marching at the People’s Climate March of Sept. 21, 2014

Suppose I was a bus driver driving a busload of people along an unfamiliar route and at a certain point my GPS device showed me that I was heading toward a precipice. I would not assume that the device is mistaken or argue that the accuracy of such devices is a matter of debate. As I got close to the edge of the abyss, I would not jiggle the steering wheel, much less step on the gas pedal. Rather, I would turn away and head in a different direction.

Yet, expand this picture to a global scale, and it shows us exactly what we’re doing with our climate. The climate crisis is probably the gravest danger that humanity has ever faced, the precipice toward which we are heading, yet those in the driver’s seat are doing just what the reckless bus driver does. They’re insisting that the great majority of climate scientists are mistaken; they’re claiming there is still a debate about the causes of climate change; they’re attacking investigators who seek to hold offenders accountable; and they’re stepping on the gas pedal with policies that will push carbon emissions to perilous heights. If they continue to have their way, they’ll drive the bus of humankind over the edge to a fate we can hardly envisage.

As a Buddhist monk and scholar, I look at the climate crisis through the lens of the Buddha’s teaching, which shows that our leaders’ dismissive attitude toward the crisis stems from two deeply entrenched mental dispositions, ignorance and craving. Ignorance is the blatant, willful, and even spiteful rejection of reality, the denial of unpalatable truths that threaten our sense of our own invulnerability. Craving is the voracious grasping after ever more wealth, status, and power, a thirst that can never be satisfied. When the two reinforce each other, what we get is a stubborn refusal to see that wealth and power, no matter how exorbitant, will be worthless on a dying planet.

What makes climate change so insidious—and reinforces the tendency to denial—is the fact that it occurs incrementally, beneath the threshold of perception. The immediate effects strike virulently only on occasion and in limited areas—a drought here, wildfires there, floods in this country or a heat wave in that one. Spared the global picture of the effects in their totality, we can convince ourselves that the extreme events we hear about are merely disconnected vagaries of the weather. And thus we go on blithely living our ordinary lives, thinking we can do so forever.

Yet, while we drift along complacently, climate change hovers over us like an ominous cloud, posing both an existential threat and a moral reproach. It’s an existential threat because, when its full consequences are unleashed, everyone will be affected. Since the climate enfolds everyone everywhere, there is no spot on earth to which one can escape. Human existence itself is in the crosshairs, and if we don’t change course, we may well bring the entire project of human civilization crashing down to a pitiful end.

At the same time, climate change reminds us that, as we procrastinate and backtrack, we are staining our moral record, committing a travesty of justice at multiple levels. At home, fossil-fuel projects tend to strike poor communities—largely people of color—more severely than they hit the rich in their more secure enclaves. On a planetary scale, the disparities are even worse. Over the past few centuries, the industrialized countries—primarily the U.S. and Western Europe—have built up their economic empires by burning fossil fuels, yet it’s the people in the poorest countries—in Sub-Saharan Africa, South Asia, and the Pacific island nations—that are paying the heaviest price. And it is these people again that will face the harshest penalties in the future when whole regions turn barren, when famine and starvation leave behind millions of emaciated bodies, when social disruption erupts in political chaos and regional wars over dwindling resources.

If we’re to avoid such a fate, we must boldly reduce our carbon emissions and hasten the transition to a clean-energy economy powered by renewable sources of energy. This must be done with utmost urgency. What we need is nothing short of a full-scale climate mobilization, as complete as the war effort launched during World War II. This will require changes not only  in our practices but in our attitudes. We’ll have to proceed from the inside out, with transformations in our minds and our values. We’ll have to replace a culture of extraction and endless consumption with one that prizes reverence for the earth and gratitude for the resplendent bounties of nature. We’ll have to reject an economy that thrives on exploitation and competition and enshrine in its place one that gives priority to mutual care, collaboration, and respect for other peoples.

To deal successfully with climate change, we must draw upon wisdom and compassion, the antidotes to ignorance and selfish craving. Wisdom is the calm voice that tells us to take the blinkers off and see things as they are—in this case, to acknowledge the truth that climate change is real, that human activity is behind it, and that the chief culprit is an economic system propelled by the quest for short-term profits. Compassion is the inner force that makes us recognize that others count too, that shakes our hearts with the suffering of others and moves us to act so that billions of people around the world are spared the death and desperation that a hostile climate would inflict on them.

By a tragic twist of fate, just at this critical juncture when fresh initiatives are called for, when bold and determined action has become imperative, our country has handed the reins of power to a president whose administration is doing exactly the opposite of what is needed. We’ve installed at the command center a narcissist who thinks he can defy the laws of nature and come out ahead; we’ve let him appoint a team that denies the hard truths of science, scorns the advice of informed policy experts, and does everything it can to pump new life into the fossil fuel industries. In effect, we’ve appointed a bus driver who is driving the bus of humanity ever closer to the cliff.

I will be marching to show our government that America must live up to its highest ideals, that we must serve the rest of the world as a model of wise, conscientious, and compassionate leadership. In short, I will be asking our leaders to to turn the bus around and lead us all into a safe and sustainable future.

This essay was originally published on Common Dreams. A shorter version appeared on the website of the Faith Contingent of the People’s Climate March.