After A Prolonged Decline, World Hunger and Food Insecurity Worsen 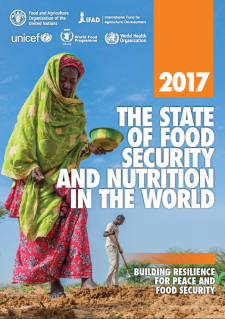 The 132-page data-rich report, The State of Food Security And Nutrition In The World 2017: Building Resilience For Peace And Food Security [1] notes that for the first time in many years the number of chronically malnourished people across the globe—as well as those suffering from acute hunger—has increased from the prior year, reversing a prolonged historic decline in world hunger. The number of undernourished people jumped from 777 million in 2015 to 815 million in 2016. Every continent except Europe and North America has suffered an increase in prevalence of malnutrition. The report identifies a variety of causes for this reversal and highlights the interrelationships between global hunger, armed conflict, and climate change.

In 2016, areas particularly hard hit by worsening food security were zones of armed conflict, especially where droughts or floods exacerbated those impacts. But the downward trend was not limited to conflict zones. Economic downturns have diminished food availability through reduced import capacity, impaired food access, and reduced ability of governments to protect poor households against rising domestic food prices. This has occurred particularly in countries that saw reduced revenue from oil and other primary commodity exports, which are traditionally used to finance food imports and subsidies and social safety nets.

Part 2 of the report analyzes in depth the relationship between conflicts and hunger. It reminds us that armed conflicts and diminished food resources create damaging self-reinforcing cycles. Armed conflict brings social disruptions, population displacement, and infrastructure destruction in its wake, damaging food production and distribution, and exacerbating food insecurity. As the report notes, “[f]ood insecurity itself can [then] become a trigger for conflict.” It urges governments and civil society to engage anew to reduce global hunger not just for its own sake, but also because “improved food security and more-resilient rural livelihoods can prevent conflict and contribute to lasting peace” (Report, p. 4).

The report addresses in detail the twin problems of childhood stunting (shortened height) and wasting (low weight for height). Although “the rising trend in undernourishment has not yet been reflected in increases in stunting,” 155 million children under the age of five — one in four children—still suffer from stunted growth. Those children incur higher risks of illness, poor cognitive skills and impaired learning ability. As a result, they suffer reduced earning potential and social skills. If stunting is widespread, it “also drags down the economic development of entire communities and nations” (Report, p. 14). Childhood wasting, causing increased risks of childhood illness and death, continues to be a serious problem. In 2016, childhood wasting affected one in twelve of all children under five years of age, a total of 52 million children. More than half of them live in southern Asia.

Preventive measures such as ensuring adequate nutrition for pregnant and breastfeeding mothers, encouragement of exclusive breastfeeding for children six months and younger, and access to adequate health care can address these conditions. In fact, breastfeeding “is considered to be the preventive intervention with the single largest impact on child survival” (Report, p. 21). Improving breastfeeding rates could prevent 820,000 child deaths each year.

Malnutrition is not only the result of inadequate nutrition, that is, diets that are low in calories, it can also result from high consumption of low-cost, high-calorie, nutrient-poor foods that can cause obesity and disease. Thus, “multiple forms of malnutrition coexist, with countries experiencing simultaneously high rates of child undernutrition, anaemia among women, and adult obesity. Childhood overweight and obesity are increasing in most regions, and in all regions for adults. In 2016, 41 million children under five years of age were overweight” (Report, p. ii).

Food insecurity is just one of the factors that cause malnutrition. In addressing malnutrition, we must also address the education of women and girls; the commitment of resources for maternal, infant and young child nutrition; the provision of clean water, basic sanitation, and quality health services; improved food environments; and cultural factors.

The Nexus Between Armed Conflict and Food Insecurity.

This year’s report devotes its entire part 2 to “Conflict, Food Security And Nutrition: The Imperative of Sustainable Peace.” Here it examines how “armed conflict affects food security and nutrition, and how deteriorations in food security conditions can exacerbate conflict” (Report, p. 30). The number, complexity, and duration of conflicts around the world have sharply increased in the past ten years.

Violent conflicts are currently at an all-time high. We cannot adequately address hunger and food insecurity without addressing the causes of conflict and their cascading effects.

Armed conflict causes an array of interrelated impacts. These can include, for example, economic recession, inflation, employment disruption, forced population movements, blockades of trade routes, damages to transportation infrastructure, the destruction of food stocks, livestock, and other productive assets, disruptions to food systems and markets, reduced access to water and cooking fuel and, of course, injuries and deaths. All of these effects damage food security and can threaten entire markets.

A recent example is the conflict in Yemen, which is “creating a country-wide crisis that is driving unprecedented levels of food insecurity and undernutrition, collapsing its social protection system, threatening a breakdown of the banking, health care, and other institutional infrastructure,” and “tipping large parts of the country into a destructive downward spiral of extreme food insecurity and increasing poverty” (Report, p. 45). Yemen’s GDP dropped by 34.6 percent in a single year, between 2014 and 2015.

This deterioration of security and increases in conflicts have stalled global progress in reducing hunger and undernutrition. In 2016, more than two billion people were living in countries affected by conflict, violence, and fragility. The vast majority of the chronically food insecure and malnourished live in such places: an estimated 489 million of 815 million undernourished people and an estimated 122 million of 155 million stunted children.

FAO currently classifies 19 countries with a protracted crisis. All 19 countries are also affected by conflict and violence, which are typically worsened by climate related shocks such as prolonged droughts. This combination of events has led to the displacement of millions of people, causing and protracting food insecurity in host communities. [2]

Food insecurity is not only the consequence of conflict; it can also be the cause. This risk is particularly high where deep inequality and weak institutions exist. Sudden spikes in food prices increase risks of political unrest and conflict, as exemplified in 2007–2008 when food riots broke out in more than 40 countries (Report, p. 52).

The report also notes the relationship between climate change, conflict and food insecurity. Climate-change driven events, such as long periods of drought, increase the risk of conflict and hunger, as they exacerbate competition for diminished food supplies, arable land, and water.

Conversely, when the global community addresses food security, reduces the potential for conflict, and strengthens adaptability and resilience in the face of climate change and natural disaster, it dampens the negative mutually reinforcing impacts of conflict and hunger.

The Report (pp. 60-73) therefore recommends that governments and civil society adopt and implement policies to:

— address the impacts to agriculture and food systems caused by conflict and civil insecurity;

— confront the root causes of competition over natural resources and mitigate their impact on food systems and the wider economy;

— prioritize investments to improve the resilience of the agricultural sector;

The U.N. General Assembly had declared the period 2016–2025 as the “United Nations Decade of Action on Nutrition.” The global challenge after 2017 is to halt the downward trend by recognizing and directly addressing the interlocking triad of food insecurity, conflict, and climate change. The Report makes clear that attaining the U.N.’s ambitious Sustainable Development Goals of ending hunger and preventing all forms of malnutrition by 2030 will demand an entirely new and focused commitment of resources and an end to “business as usual.”

Charles W. Elliott is an attorney with 30 years of experience in public interest litigation on behalf of municipal governments, environmental organizations, and victims of environmental pollution. He is also a member of the Board of Directors of Buddhist Global Relief.

[1] FAO, IFAD, UNICEF, WFP and WHO. 2017, The State of Food Security and Nutrition in the World 2017: Building resilience for peace and food security, Rome, FAO. The full report is available at the FAO website at: http://www.fao.org/3/a-I7787e.pdf

[2] For example, the civil war in Syria has forced more than 6 million people to flee their homes to other locations within the country and another 5 million to nearby countries. This amounts to a displacement of more than 60% of the population. As a result of this conflict, agriculture production is at a record low in Syria, “with about half the population unable to meet their daily food needs” (Report, p. 44).

One response to “The World Reverses Progress on Global Hunger”