BGR’s partnership project with Oxfam Sudan, “Increasing Household Food Security in South Darfur,” provides needed seeds, agricultural tools, and field training to people in the South Darfur region of Sudan, who for over a decade have endured devastating violence and human rights violations as well as climate-related agricultural disruptions. In 2014, a rash of violence by government forces led to the displacement of more than 100,000 people across the Darfur region, as well as to the destruction of water sources, food stores, and other essential infrastructure.

Oxfam Sudan reported that many farmers participating in the project faced climate-related difficulties, including a combination of some flooding during the rainy season and drought during the September period of crop maturity. Furthermore, land disputes at times resulted in threats of violence, and some farmers harvested crops prematurely to prevent the grazing animals of nomadic pastoralists from consuming the plants.

Despite these challenges, Oxfam Sudan estimates that farmers produced enough sorghum and groundnuts to meet 60 to 70 percent of their families’ annual food requirements, on average, with surplus groundnuts to be sold at market, providing funds to be used for food, education, health care, clothing, and other needs. 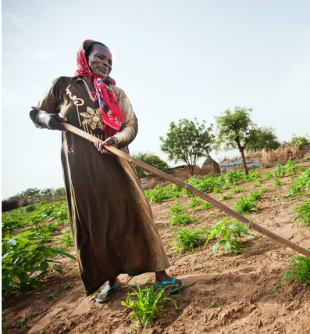 Among the displaced persons who received support through the Oxfam–BGR partnership was Sumaiya Adam Ahamed, a farmer in Eshma village in South Darfur. With her family she spent two years in a camp for internally displaced people (IDPs). “All people of my village [were] displaced to Kalma IDPs camp and stayed there for two years without farming, and our children missed two years of education, especially my elder daughter, Ishraga Hassan,” she told an Oxfam Sudan team member as she harvested groundnuts with two of her daughters. She wore her youngest child, an infant, in a cloth carrier as she worked. “My family was selected by the Oxfam team for support, and we were given groundnut and sorghum seeds in addition to two hand tools. This enabled us to cultivate one acre of groundnuts and one of sorghum.” She estimated that the crops would feed her family of seven for five months; she also supports her family by raising chickens and livestock.

Tricia Brick is a writer and editor in the New York metropolitan area and a volunteer staff writer for Buddhist Global Relief.

One response to “Increasing Food Security for Families in South Darfur”