Posted on May 29, 2020 by Bhikkhu Bodhi | Comments Off on Emergency Relief Assistance to Sri Lanka

On March 31st BGR donated $1,000 to the Karuna Trust in Sri Lanka, which has been distributing parcels of dry rations to poor families hit hard by the strict curfew imposed in the country on account of COVID-19. The Karuna Trust is working together with the the Divisional Secretariats to feed poor children and elders in orphanages and elders’ homes, which now have no way of obtaining food from their regular donors. A few days ago we received the following account from Mr. Mahinda Karunaratne, founder of Karuna Trust, along with several photographs of a food distribution. 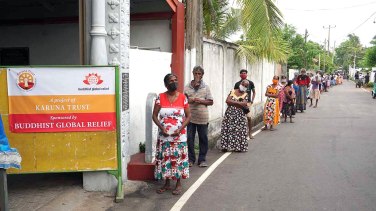 On March 30th I sent an email to my donors, well-wishers, and friends requesting funds to help the daily wage-workers who had lost their earnings due to the curfew. In response I collected LKR 3.3 million, including the donation I received from Buddhist Global Relief. I am happy about the trust the people have placed in me. Apart from this amount, Karuna Trust also allocated LKR  1 million, which we will use for the second stage of COVID-19 relief work.

Within this period we have given 3312 dry ration parcels to people who have lost their daily income due to the curfew, in fifteen Divisional Secretariat Divisions. Consumer items have been given to eight orphanages, two bhikkhu training centers, fifteen  Buddhist temples, four temples of Buddhist nuns, and eight churches. All these activities were done under the supervision of the Divisional Secretaries and a representative of ours participated in each and every distribution.

Yesterday we had our last distribution of dry rations in Moratuwa where we gave 150 parcels to mostly poor families in a fishing village. I also participated in this distribution but I did not hand over the parcels to the people.

As a result of COVID-19, over 200,000 people in Sri Lanka have lost their jobs, the majority of them minor employees. Many of these people live in rented houses. They don’t have any other income. Usually these families have three or four children and now they will face difficulty sending their children to schools, and thus these children’s studies will be affected.

Our second stage of COVID-19 relief work will be to give a short-term scholarship for these students. We plan to give a minimum of LKR 1000.00 ($6.00) per student, and at the beginning, 200 scholarships from the interest of Karuna Trust funds. We will increase the number of scholarships according to the donations we get.

The last distribution of dry rations took place on May 18th at the Buddhist temples of Deegawapi, China Bay, and Lunawa temples. The Deegavapi distribution was organized by the Governor of Eastern Province, at China Bay by Ven. Aluthoya Saddhathissa Thera, and at Lunawa by Ven. Agalakada Sirisumana Thera. 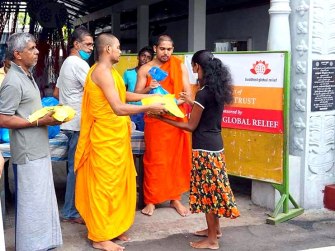 The photos show the distribution of parcels at the Lunawa and Deegawapi temples.