The Price of Dignity

When it comes to eliminating poverty, private charity cannot replace public policy, and public policy must be guided by a moral perspective. We have the resources to overcome poverty. The big question, as always, is whether we have the will to do so.

Fifty years ago this month, in his first State of the Union address, President Lyndon Johnson declared an “unconditional war on poverty in America.” Johnson saw this as a national priority and he urged Congress and the American people to join him in the endeavor “to help that one-fifth of all American families with incomes too small to even meet their basic needs.” It was, he said, a war we “can afford to win,” one that we could “not afford to lose.”

Johnson understood that to improve the condition of the destitute, we had to attack the root causes of poverty, and not merely its symptoms. In the years that followed, his administration launched a volley of programs, many of which are still with us today, to offer the poor better education, better healthcare, better jobs, and better homes. They included Medicare and Medicaid, Head Start, better funding for K-12 education, loans to low-income college students, housing assistance for low-income families, and legal aid for the poor. Under Johnson, the food stamp pilot project became a permanent program that would eventually eliminate severe malnutrition, which, in the early 1960s, made parts of the U.S. seem as if they were in a Third World country.
END_OF_DOCUMENT_TOKEN_TO_BE_REPLACED 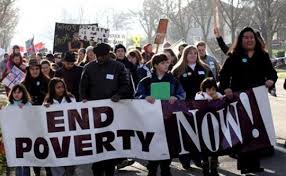 Americans routinely hail their country as the greatest nation on earth, a land of boundless opportunity providing everyone the chance to fulfill their dreams of freedom, prosperity, and success. Reality, however, does not quite live up to this rhetoric. Over the past three decades, U.S. poverty rates have actually increased and by 2010 over 46 million people in this country, approximately 1 person in 7, could be considered poor. In flat contradiction to its self-image, the U.S. now ranks lowest among industrialized nations on many critical indicators of economic and social well-being.

According to a briefing from the Institute of Policy Studies, among all economically advanced countries, the U.S. has the highest rates of relative poverty and child poverty. It also has one of the largest margins of income inequality and the smallest number of social services provided to its citizens. Contrary to the creed of neoliberal economic theory, those countries in which the government devotes more funds to social services are consistently more successful in reducing poverty and inequality than those that adopt a “Wild West” version of corporate capitalism.

Politicians have treated poverty as if it were a taboo topic not to be spoken about in polite company. While long hours in Congress are devoted to debating how to avoid a fiscal cliff, barely a glance is given to those who have fallen off the poverty cliff and face a daily struggle just to survive. Talk about reducing the economic burden on the middle class and protecting small businesses is considered respectable, but acknowledging the existence of an underclass can raise shrieks about “class warfare,” as if it were the poor that are attacking the rich.
END_OF_DOCUMENT_TOKEN_TO_BE_REPLACED