Building Bridges for Poor Widows in the Punjab

Posted on May 1, 2019 by Bhikkhu Bodhi | Comments Off on Building Bridges for Poor Widows in the Punjab

Building Bridges India represents a bridge from the past to the future, from a patriarchal society to an egalitarian one in which women have role options, rights and responsibilities; a passage from despair to hope. 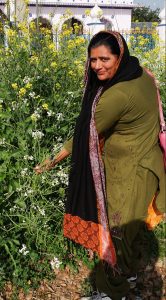 For over thirty years now, parts of Punjab have been stricken by a tragedy barely reported in the mainstream media: the suicides of small-scale farmers. A fatal combination of factors, including successive seasons of bad weather, the soaring cost of seeds and fertilizer, a falling water table, and the usurious rates imposed by moneylenders, have combined to make it impossible for them to sustain themselves on their ancestral lands. Seeing no way out, thousands have taken their own lives. Their deaths are tragedy enough. But for the widows and children they leave behind, life becomes a desperate struggle simply to survive.

Untrained, often illiterate and malnourished, burdened with their husbands’ debts yet without any way of earning an income, the women left behind–sometimes older, sometimes quite young–are responsible for housing and feeding themselves, their children and sometimes elderly relatives as well.

Working under the aegis of the Kabliji Memorial Trust, Building Bridges India (BBI) is committed to empowering women whose husbands committed suicide because of their indebtedness, leaving them to repay mounting debts and support their families. Over the period October 2017 through September 2018, Buddhist Global Relief partnered with Building Bridges on two projects in the Sangrur district in the southern Punjab:

(I) a project to increase food production by introducing women to organic farming, which would improve their health and nutrition and increase their incomes; and

(II) a project to train women for long-term sustainability through handicraft and garment production.

Underlying both projects is BBI’s commitment to fostering women’s sense of efficacy, community, and ability to negotiate the challenges they encounter within their own families and in the broader society. Since BGR sees the empowerment of women as one of the most effective ways to rescue them from degrading poverty and chronic hunger, we were delighted to join hands with Building Bridges in sponsoring these projects.

BBI’s organic farming initiative is designed to promote the use of organic farming techniques, increase the production of nutritious fruits and vegetables, and improve the health of women and their families. BBI has trained a total of 300 people at ten workshops on organic farming. The workshops were held on land adjoining gurdwaras (Sikh temples) in Makod Saab, Balran, Hamirgarh, Chotian, and Khokhar from October 2017 to August 2018. Most of the participants were from poor, landless, and small farmer backgrounds. Two professors from Punjab Agricultural University in Ludhiana, Dr. Daljit Singh Khurana and Dr. V.K. Kaul, facilitated them.

The main objectives of the workshops were to teach women about the nutritional value of particular fruits and vegetables, introduce them to natural farming techniques, and involve them in educational hands-on activities. The target group was from the social strata that either never had the chance to attend school or dropped out because of their social circumstances. The project also nurtured the women’s capacity for self-reliance and identified some among them who could act as master trainers or drivers of change.

A workshop in October 2017 taught participants how and when to sow such winter vegetables as radish, spinach, peas, turnips, carrots, fenugreek, eggplant, and tomatoes. A workshop in April 2018 taught them to sow summer vegetables like beans, cucumber, pumpkin, okra, tomato, ridge gourd, and lemons. In March 2018 women were taught how to grow several varieties of fruit, including mangoes, apricots, papayas, melons, and watermelons.

A total of 45 women and men participated in three workshops conducted by Professor Kaul in November and December 2017. The professor taught the participants about simple, bio-efficient methods of growing oyster mushrooms. Of the 45 women who had participated in these workshops, a year later 20 had taken up mushroom cultivation in their homes, both for personal consumption and for sale on the market.

BBI organized workshops in producing pickles from vegetables that the women harvested in the winter, both to donate to the gurdwaras and to sell on the market. Over the past six months, approximately 25 women produced 100 pounds of pickle from winter vegetables. These women were each able to earn about Rs 2,000 after selling the vegetables and pickles the first time they tried this.

Health Awareness Workshop
To increase women’s understanding of their own bodies, particularly reproductive health, Sunita Gupta, a medical doctor, organized four workshops with a total of 100 women in four centers from July to August 2018. She provided women with information about contraception, personal hygiene, and ways to prevent and treat common infections. She also spoke to them about the causes of malnutrition and the importance of a balanced diet. The women who participated were able to ask questions and clarify common misconceptions.

In collaboration with Rajan Gupta Eye and Health Care Hospital in Tohana,BBI organized five day-long camps  in July and August 2018. The camps were held in Makod Sahib, Balran, Gaga, Hamirgarh, and Khokhar Bishanpura centers, and were open to all the women who participate in BBI centers. Over 250 people joined the camps. Most were diagnosed with eyesight-related problems for which they were treated with medications. Ten women underwent cataract surgery. The eye screening camp taught women about the importance of routine eye care and the causes of eye disease and blindness.

During the health camp in November 2017, participants’ blood was checked to determine their nutritional deficiencies. The tests revealed that most women had moderate to severe anemia, caused by malnutrition, particularly inadequate iron and vitamin A. BBI did a follow-up survey at the end of the project cycle in September 2018 and found that the incidence of anemia and malnutrition had declined. The women are now much better informed about the importance of a nutritious diet and they eat more vitamin-rich vegetables and place more value on their own health. These women look healthier and seem more energetic than they did in the past. 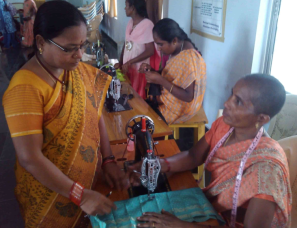 This project aimed to develop economically marginalized women’s vocational skills and entrepreneurial abilities, with a focus on sewing, embroidery, and craft production. During the project period 100 women in Lehel Kalan, Balran, Chotian, Hamirgarh, and Mandvi were trained in basic sewing and embroidery. After providing them with basic skills, BBI identified a designer who could conduct the workshops and help the women reach a more upscale market. This was Ms. Shalini Saluja, a graduate from Pearl Fashion Academy in New Delhi. Ms. Saluja founded Indie Cotton, a successful boutique that collaborates with craftspeople from all over India to create exquisite handicrafts. Indie Cotton aspires to offer sustainable livelihoods to workers and thus make trade commercially viable for everyone involved.

A total of four design workshops were organized with 100 women in the Balran center from November 2017 to March 2018. Ms. Saluja and Ghazala Khan identified suitable designs for workshop participants, and instructed them on the threads and patterns required to do many different kinds of embroidery. The focus was on the revival of phulkari, a traditional hand embroidery from Punjab, and its adaptation to meet contemporary tastes. In addition, BBI decided to make home furnishing items like cushion covers, table mats, napkins, table runners, tablecloths, accessories, key chains, and stoles, using traditional hand embroidery and crochet.

The workshops were organized with 50 women in collaboration with a government institute, the Indian Technical Institute (ITI) Moonak, in June and August 2018. The main topics covered during the workshops were communication skills, the importance of group work, product design, pricing, quality standards, reliable product delivery, publicizing the goods, and learning about market demand. Participants acquired skills in functional and numerical literacy including learning about bank operations, basic accounting, and marketing skills.

Long Term Sustainability: Self-Assessment and Impact
BBI has regularly monitored and evaluated its programs to ensure that participants are from the most economically disadvantaged groups. Although they have made a particular effort to include women who have experienced a suicide within the family, they have included other women with pressing financial needs. BBI’s goals in the last phase of the BGR grant were to expand the scale of activities to include more people, provide them with additional skills, and enable the women who had been trained to become agents of change within their communities.

With respect to the organic farming initiative, over the past year, BBI has hired experts who have taught women new methods of cultivation and food storage. For example, women were able to produce more green vegetables than they could consume and learned how to dry and store them for use the following season. BBI organized health camps at regular intervals, which local government officials, doctors, and nurses attended. A survey found that the health of the women and their family members improved and the incidence of anemia and malnutrition declined. This was likely due to the organic farming initiative. With respect to garment and handicraft production, BBI hired a designer who has worked with women to improve the quality of their products and ensure greater consistency in the quality of their work. It forged a partnership with the ITI which developed women’s entrepreneurial skills.

As a result, trainees’ income has increased from around Rs 4,000 a month before the workshops began to about Rs 7,000 a month today. In addition to paid professionals, BBI selected 15 of the most enthusiastic participants to train other women in their villages in the skills they acquired.

The BBI report concludes by thanking Buddhist Global Relief for providing them with the resources they need to give opportunities and hope to destitute women. They write: “Our efforts would have been unimaginable without your support.”

Voices from the Field
“I joined Balran Vocational Training Centre in July 2017 to get training in tailoring and embroidery. With this training I can now stitch clothes for my family and myself and I’ve been able to earn an income by selling my clothes on the market. I am thankful to Dr. Sunita and other experts for helping me understand my health and how it’s related to social issues. I hope they will continue to visit and provide support to young women like me.”
Kiranpal, Balran center, December 17, 2018

“I attend the activities at the center regularly and have learned so many new things there. My family is very poor and we need to learn how to increase our income by developing new skills.”
Sukhjinder Kaur, Lehel Kalan center, December 19, 2018

“I participated in the workshops on organic farming with Dr. Khurana and Prof. Kaul. I enjoy growing mushrooms and other vegetables. I learned so much from the workshops and want to continue to participate in them and in all the other activities at the center.”
Rani, Makod Sahib center, November 27, 2018

“I come from a very poor family and did not have any means of earning an income until I joined the center in August 2016. I learned to use a sewing machine to make clothes and do phulkari embroidery with different color combinations. Since receiving this training I’m earning enough money to pay for the school fees of my two younger siblings and contribute to household expenses.”
Jasveer Kaur, Balran center, November 26, 2018

“I joined the center to learn how to sew. After that I became interested in organic farming and participated in the workshops in October 2017. I’ve been able to grow vegetables to feed my family and to sell them for an income. Although our family is poor, our living conditions have improved since we became involved with these projects.”
Neetu Sharma, Hameergarh center, December 17, 2018

This post has been largely based on the final project report from Building Bridges India to Buddhist Global Relief for the period October 2017 to September 2018.