On Global Hunger and Climate Change

Posted on November 22, 2019 by Bhikkhu Bodhi | Comments Off on On Global Hunger and Climate Change 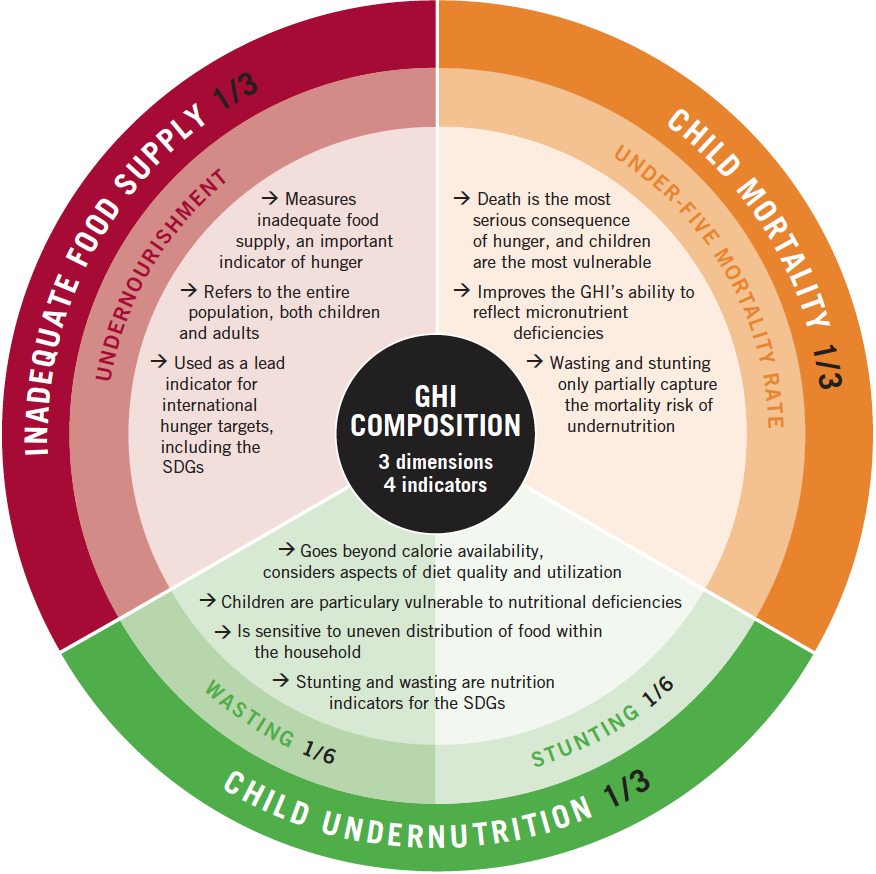 Over recent years funding for nutrition has increased and global poverty has been reduced, yet global hunger has still been on the rise. The number of hungry people has risen from 785 million in 2015 to 822 million in 2018. How is this possible? According to this year’s Global Hunger Index, it’s because we’re not efficiently addressing the newer causes of hunger–principally conflict and climate change.

The Global Hunger Index (GHI) is an annual report put out by the international Committee on World Food Security. Using data from 2014 to 2018, it scores countries using four components: undernourishment, child wasting (low weight-for-height), child stunting (low height-for-age), and child mortality. This year it measured 117 countries, forty-three of which show levels of “serious” hunger. Four countries—Chad, Madagascar, Yemen, and Zambia—have “alarming” levels of hunger, and the Central African Republic suffers from a level that is “extremely alarming.” While the report shows that progress has been made since 2000, the number of undernourished people across the globe is increasing. This is especially the case in sub-Saharan African countries affected by conflict and drought, and in South Asia, which shows the highest levels of child stunting and child wasting.

This map shows the different degrees of severity in hunger around the world.

Differing from previous reports, this year’s GHI focused on climate change as an increasingly impactful factor in rising hunger. As temperatures rise, food production is likely to fall. This is because higher temperatures cause water scarcity, greater CO2 concentration in the atmosphere, and extreme weather events such as heat waves, floods, droughts, and wild fires. The report also states that weather anomalies and extreme events will result in rising food prices, further restricting people’s access to food.

The report noted that these changes are already happening. Yields of major crops such as maize and wheat are declining, mainly from epidemics of plant disease. Also, due to higher CO2 concentrations, crops are showing reduced amounts of protein, zinc, and iron. These deficiencies further contribute to malnutrition. It is a cruel irony that the current agricultural system produces between 21 and 37 percent of total man-made greenhouse gas emissions, trapping us in a deepening feedback loop—as we continue with current methods of agricultural production, we’ll further contribute to climate change, further resulting in declining yields and nutrition deficiency.

This is why this year’s GHI maintains that deep structural changes are needed. Global hunger is rising largely because of climate change. Therefore, the report argues, rather than simply donating money and providing food, we need to focus on shifting to sustainable energy and ecologically friendly agricultural methods.

In the report, Rupa Mukerji, of the independent Swiss development organization Helvetas, authored a special section on climate change and hunger. “More ambitious actions are required to reduce the risks of climate change (mitigation) and to cope with its impacts (adaptation) on food and nutrition security,” Mukerji urges, as “the small or incremental changes will not deliver the scale or pace of change needed to remain within the 2 degree Celsius warming threshold as defined by the Paris Agreement.”

Yet just recently, on November 5, the Trump administration formally announced to the UN that the U.S. is withdrawing from the global climate agreement. In the face of such blind, destructive policy, Mukerji boldly argues that the goals of Zero Hunger and the Paris Agreement “demand a profound and deliberate shift toward sustainability, facilitated by changes in individual and collective values and behaviors and a fairer balance of political, cultural, and institutional power in society.”

This shift will certainly be a great challenge, but the report’s final page includes a list of policy recommendations that map the way to get there. They begin with general recommendations; for instance, “Governments must facilitate public participation in climate decision making” and “All countries, particularly high-income countries … must implement more ambitious measures, such as decarbonizing their energy sector, building green infrastructure, and boosting carbon sequestration.”

Then they move toward a more concrete, immediate approach: “Donors and governments must increase investments in disaster prevention and disaster risk reduction, especially in vulnerable regions prone to extreme weather events. This includes investing in early warning and response systems, forecast-based financing mechanicals, and adapted infrastructure.” In other words, while we continue to work to prevent climate change, let’s also prepare for it.

In view of this year’s Global Hunger Index, it’s notable that many of BGR’s 43 current projects provide direct food aid to many of the countries the report lists as having “serious” levels of hunger, and also trains locals in sustainable farming methods. Additionally, BGR aligns with climate-focused organizations like 350.org and the Sunrise Movement, and draws attention to the connection between climate change and hunger in our newsletter and blog. While BGR’s formal aim is not climate activism, these projects and actions show a determination to address the environmental causes of the problem, because as long as the polices and methods that fuel climate change continue, global hunger will increase.

Randy Rosenthal teaches writing at Harvard. His work has appeared in The New York Times, The Washington Post, and many other publications.